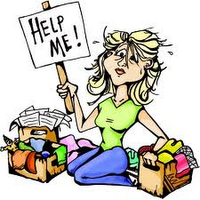 What's going on in my world.

Haven't blogged in a while and thought I had better write something. Let's see...

Today, I went and got my hair cut and styled. Colored too. But in the future I will be doing the coloring myself. I hated to tell my hairdresser that. But it is much cheaper to just do it myself. Why do we get so attached to our hairdressers? What's with that?

I returned some books back to the library. On time too! And checked out the three Tightwad Gazette books. I've read really good things about these. I can't wait to peruse them.

Dd has finished Upwards basketball and is all signed up for Upwards soccer. Her first game is April 4th. I was surprised when she said she would do it. It will be good for her.

Dh is taking classes on Saturday mornings at Robyn's school. He is getting some IT certification that he has been wanting. It is self-paced and he is enjoying it and learning things he didn't know. He is a computer geek but pretty much self-taught. Now he can earn the certifications to prove he really is a geek! He'll be certifiable! lol

We are going to drive up to see Mom and Dad on Saturday. I haven't been up there since sometime in January. Bad daughter, bad daughter. They want to see their granddaughter. Who can blame them?

Sunday, our missions conference begins at church. I 'm looking forward to seeing our missionaries. Robert is working the A/V room that morning. He really enjoys that. So I'll go off to our Adult Bible Fellowship all alone. I miss him when he is not with me.

I got off my big behind and made myself go grocery shopping yesterday. Boy, it has really been a chore for me to do this lately. What's with that? The winter doldrums? I enjoy perusing the sale ads, making my menu, and making my shopping lists. It's just getting myself to the stores that seems to be difficult lately. I want spring! Darn it!

Well, guess I better get busy on the nana pudd and salad. Have a great weekend!

We had snow today!

It was so strange to wake up to snow this morning. I heard those winds howling last night as I was going to sleep. What a nice gift to wake up too.

Dh and dd are watching Twister. Dd is into storms. She likes to read books about storms. She talks a lot about storms. She watches the weather channel. She even has a little thingy with water in it that you spin and it makes a tornado inside it. Thunder, she doesn't like so much.

We just finished eating our dinner. It was delicious. I baked my casserole in my new oven which was delivered this morning. The old one died. We just bought an inexpensive white one to match the other appliances. Our fridge, being the oldest at 11 years, is still running fine. But once it dies we want all stainless steel appliances. So we went for a plain cheapo stove to do until then. It was fun looking at all the pretty stainless steel appliances at Lowes. Robyn like them too and can't wait for us to get them. I can. Cha-chang!

Well, I will go for now and check out a few of my favorite blogs. When the movie is over dd is getting a bath and her dirty head washed. I must get up and get her off to school and pick up the house before a few of my friends come over. My friend, Marge is teaching Julie and I how to crochet! I can't wait.

Pam
Posted by Chaos Cottage at 6:08 PM No comments:

"So teach us to number our days, that we may apply our hearts to wisdom."

Time is short, the days are fleeting,
Not one step can I retrace.
Every morn a new day greeting,
Yesterday I can't replace.

Help me, Lord, to do thy bidding,
Help me live each new day through
As I would if life were fading
As the sunset comes to view.
-Hazel A. Dillehy
(Christian Woman Magazine, circa 1960)
Posted by Chaos Cottage at 10:34 AM No comments:

Heat oven to 400 degrees. Grease 9 inch glass pie plate. (I sprayed with Pam). In pie plate sprinkle broccoli, one cup cheese and the chicken and onion.

Bake 30-35 minutes or until knife inserted in center comes out clean. Sprinkle with remaining 1/2 cup cheese. Bake 1-2 minutes or until cheese is melted. Let stand five minutes before serving.

I am guessing this will be something like a Quiche.

I cooked up 2 1/2 pounds of chicken breast. I used a cup or a little more for this. Cut up four cups worth to freeze and use for a recipe on Sunday and still have over two cups left to make chickens salad for dh and I to eat for lunch tomorrow. How's that for stretching chicken?

My menu this week

Thursday: Stuffed Green Peppers (homemade and from the freezer)

Can you say Yum-o!
Posted by Chaos Cottage at 10:44 PM No comments:

It's a beautiful day!

We had a nice Valentines weekend. Dd had a friend over for a sleepover on Friday night. The next day I had to get the girls to their Upward Basketball games. Robyn's team won and she even scored a basket. She did a better job of rebounding as well.

Robert and I exchanged Valentines/Anniversary cards and I got him a box of candy and he got me a dozen red roses. It was our 11th anniversary. Last year, for our tenth, we went to the Grove Park Inn in Asheville, North Carolina. We went there shortly after we were married and knew we would come back again. I just love that place. It would have been nice to have been there again this year, but yikes that place is uber-expensive! It will probably be another ten years before we go back again. lol

Sunday, dh worked the audio-visual room at church and dd and I attended Sunday school. We skipped the church service this week. Bad mommy, bad daughter! Dd said her belly was hurting so we thought it best to just come on home. She is better now.

Today I have taco soup cooking on the stove to take to a family who lost a loved one this weekend. Instead of going to our usual Monday night small group Bible study, we are all going to go to the funeral home to support this family.

Dh is home and diligently working at his computer. His company has a workers comp audit today and he just found out about it this morning. I think we was thinking of not working today as it is a holiday but he found out about this at the last minute. The insurance lady who normally informs him about this, at least a week ahead of time, was in a car accident and so he just found out. He's drinking his coffee and working away in the study. He just informed me he will have to go into work after all. Aw, shucks!

Dd and I will take the soup to the family mentioned above and make a run to the library. They should be open today. She needs a book about a northern young lady during the Civil War. Her school is doing a Night at the Museum and that is her role. I need to make her an old-fashioned dress too. That should be fun. Not!!!
I think I have a month to figure that one out...let's see, how long has it been since I took Home Ec?

I need a new stove. This one has gone bonkers. You know those new electronic type of appliances just don't last as well as the old ones did. This one is nine years old. We will probably just go to Lowes and get something similar. It's the oven that won't work now. I sure have missed it. I have been using my little toaster oven for a few weeks and I am limited as to what will fit in there.

Well, I guess I had better get busy. The day is just flying by. More later.

Pam
Posted by Chaos Cottage at 10:12 AM No comments:

(Makes 2 casseroles of 4 servings each)

In Dutch oven, cook beef over medium heat until no longer pink; drain. Add the gravy, vegetables and onion. Spoon half into a greased 2 quart baking dish. Top with mashed potatoes. Drizzle with butter and sprinkle with paprika.

Bake, uncovered at 350 degrees 30-35 minutes. Place remaining beef mixture in a freezer container and freeze up to 3 months.

To prepare frozen casserole: Thaw in refrigerator; transfer to a greased 2 quart baking dish and top with potatoes, butter and paprika. Bake as directed.
Posted by Chaos Cottage at 5:35 PM No comments:

Do you plan your meals? I like to do this. I don't always stick to the plan but it helps in grocery shopping and avoiding the "it's 5'oclock and what's for dinner" dilemma. Here's my plan for this week:

Tuesday: Stuffing Easy Chicken Bake (using up my last box of Stove Top Stuffing), Corn on the Cob (those cute little ones!)

Wednesday: Mini-shepherd's pies (making this with turkey and freezing some for a later meal), Tossed Salad

Saturday: Spaghetti sauce with whole wheat pasta, Salad, and maybe some yummy homemade spaghetti bread (just bread with Italian seasoning and parmesan-I make the dough in the bread maker and then bake in the oven-much better!)

Pam
Posted by Chaos Cottage at 7:39 AM No comments:

Me and my daughter's blog

It's official! I'm a pinhead! 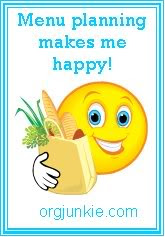 Chaos Cottage
I'm a Christian, a Stay At Home Mom, and Mother of one not so little girl anymore who brings me such joy. I'm a blessed wife of a wonderful, hard working man who is the love of my life. Join me on my journey to getting my life organized, feeding my family and enjoying life! And we have FOUR cats. Make that FIVE cats now! We're crazy! 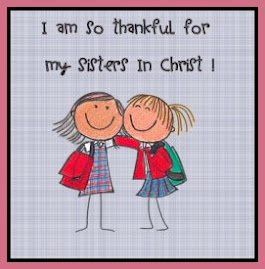